Professor PPLI and the Caterpillar

Our next series of articles will comprise an in-depth look at the five main components of our PPLI Concept Map: Professor PPLI to the Rescue.

In our earlier articles we entertained several views on the word rain, and explored various ways that the English language used the word rain in colorful ways to describe its effect on a client’s assets. Professor PPLI has a rye sense of humor! You will receive more in this vein further in our article from Lewis Carroll’s Alice in Wonderland. Professor PPLI meets his match in the person of the Caterpillar.

We also cast life insurance, in particular Private Placement Life Insurance (PPLI), in the role of a protective outer garment that can protect client’s assets against the assault of the rain.

Now I ask you to exchange this protective outer garment for one of nature’s most magical acts: the 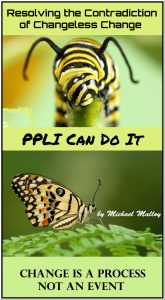 From the Scientific American, Ferris Jabr brings us

“How Does a Caterpillar Turn into a Butterfly? To become a butterfly, a caterpillar first digests itself. But certain groups of cells survive, turning the soup into eyes, wings, antennae and other adult structures”

“As children, many of us learn about the wondrous process by which a caterpillar morphs into a butterfly. The story usually begins with a very hungry caterpillar hatching from an egg. The caterpillar, or what is more scientifically termed a larva, stuffs itself with leaves, growing plumper and longer through a series of molts in which it sheds its skin. One day, the caterpillar stops eating, hangs upside down from a twig or leaf and spins itself a silky cocoon or molts into a shiny chrysalis. Within its protective casing, the caterpillar radically transforms its body, eventually emerging as a butterfly or moth.

But what does that radical transformation entail? How does a caterpillar rearrange itself into a butterfly? What happens inside a chrysalis or cocoon?

First, the caterpillar digests itself, releasing enzymes to dissolve all of its tissues. If you were to cut open a cocoon or chrysalis at just the right time, caterpillar soup would ooze out.”

Like the transformation of the caterpillar into a butterfly, the of re-characterizing of assets inside a PPLI becomes an equally magical experience. Once assets are placed inside the PPLI policy, these assets take on the six principles of Expanded Worldwide Planning (EWP): privacy, asset protection, succession planning, tax shield, compliance simplifier, and trust substitute.

We are not finished with the Caterpillar, and now reveal him in a new guise. Because Professor PPLI has such a rye sense of humor, we now switch to a master of quizzical, British humor, Lewis Carroll, in Alice in Wonderland.  The very idea of raining inside an insurance policy is puzzling, and brings to mind an equally puzzling exchange between Alice and the Caterpillar.

“’Who are you?‘ said the Caterpillar.

This was not an encouraging opening for a conversation. Alice replied, rather shyly, ‘I — I hardly know, sir, just at present — at least I know who I WAS when I got up this morning, but I think I must have been changed several times since then.’

‘What do you mean by that?’ said the Caterpillar sternly. ‘Explain yourself!’

‘I can’t explain myself, I’m afraid, sir’ said Alice, ‘because I’m not myself, you see.’

‘I don’t see,’ said the Caterpillar.

‘I’m afraid I can’t put it more clearly,’ Alice replied very politely, ‘for I can’t understand it myself to begin with; and being so many different sizes in a day is very confusing.’

‘It isn’t,’ said the Caterpillar.

‘Well, perhaps you haven’t found it so yet,’ said Alice; ‘but when you have to turn into a chrysalis — you will some day, you know — and then after that into a butterfly, I should think you’ll feel it a little queer, won’t you?’

‘Not a bit,’ said the Caterpillar.

‘Well, perhaps your feelings may be different,’ said Alice; ‘all I know is, it would feel very queer to me.’

‘You!’ said the Caterpillar contemptuously. ‘Who are you?’

Which brought them back again to the beginning of the conversation. Alice felt a little irritated at the Caterpillar’s making such very short remarks, and she drew herself up and said, very gravely, ‘I think, you out to tell me who you are, first.’

‘Why?’ said the Caterpillar.

Here was another puzzling question; and as Alice could not think of any good reason, and as the Caterpillar seemed to be in a very unpleasant state of mind, she turned away.

‘Come back!’ the Caterpillar called after her. ‘I’ve something important to say!’

This sounded promising, certainly: Alice turned and came back again.

‘Keep your temper,’ said the Caterpillar.

‘Is that all?’ said Alice, swallowing down her anger as well as she could.

‘No,’ said the Caterpillar.

Alice thought she might as well wait, as she had nothing else to do, and perhaps after all it might tell her something worth hearing. For some minutes it puffed away without speaking, but at last it unfolded its arms, took the hookah out of its mouth again, and said,

‘So you think you’re changed, do you?’

‘I’m afraid I am, sir,’ said Alice; ‘I can’t remember things as I used — and I don’t keep the same size for ten minutes together!’

‘Well, I’ve tried to say “How doth the little busy bee,” but it all came different!’ Alice replied in a very melancholy voice.”

Alice’s state of mind reminds me of tax advisor who doesn’t understand PPLI. These advisors can’t conceive of an insurance policy accomplishing more than a trust. But in a sense, this can be seen with a little reflection–these advisors are mostly in the business of creating trust, or giving tax advice, and think that insurance is beneath their dignity. Much like Alice regards the Caterpillar.

Ironically, most PPLI policies are owned by trusts. PPLI greatly expands the trust’s possibilities by coupling amicably with a properly structured PPLI policy.

Tax in the Real World

I think most people would agree that in an ideal society, taxation would promote the common good. But putting this into practice is extremely difficult. Who to tax and how much to tax is much debated throughout the world, and countries approach this dilemma in many different ways, depending on the type of government and their societal goals.

Strong central governments are able to implement their programs with greater ease than in societies that are more pluralistic and democratic, but this is still no guarantee that the programs implemented will be successful, and promote the common good.

Promoting the common good reminds me of the quest to rid the world of the One Ring in J. R. R. Tolkien’s Lord of the Rings. Written during the time of World War II, Tolkien’s epic novel offers us an example of a quest to rid the world of a device, the One Ring, that had the ability to unleash destruction and enslave the peoples of Middle Earth. In the end, service and steadfast devotion won out over greed and power.

At Advanced Financial Solutions, Inc. our quest is to give you maximum tax efficiency and privacy while maintaining your compliance with the world’s tax authorities. Our PPLI structuring uses a simple, straightforward, and traditional tool–life insurance. Our service and steadfast devotion to your needs produces exceptional results. Please let us know your situation so we can create a plan that works for your own unique set of circumstances.